The cheetah is currently classified as vulnerable to extinction; it faces a myriad of threats primarily as a result of increased proximity to human habitation. Despite Kenya being recognized as a critical part of the global cheetah distribution and home to approximately 300 free ranging cheetahs, little is known about the population as a whole. DNA from blood, tissue and poo will generate information required to better conserve this iconic species.

The global cheetah population is rapidly dwindling, and with less than 7000 individuals left, confined to only 9% of their historical distributional range, cheetahs are vulnerable to extinction. Unfortunately the remaining populations will continue to decline unless something is done. As such, we aim to generate and incorporate the first conservation genomic data on cheetahs conservation plan in Kenya.

Kenya, like other African countries is facing rapid human growth. This has negatively impacted cheetah populations through the effects of habitat loss and subsequent human-wildlife conflicts. It has also drastically affected the cheetah’s natural dispersal corridors, as they are known to utilize wide ranges leading to small fragmented populations. This research intends to firstly develop a high-resolution genetic tool that can be used to individualize with the potential to monitor cheetah numbers using poo thus reducing the elevated cost of capture and its possible damages. Also, DNA from the poo will help to determine the diet composition and whether livestock are preyed upon more frequently. This will resolve the human-cheetah conflict

We aim to identify candidate single nucleotide polymorphisms markers and develop a high-resolution assay for individual cheetah identification. We will then evaluate the reliability of this assay to accurately genotype cheetahs from poo samples. This will help to closely monitor cheetah numbers and movements avoiding the elevated cost of capture and its possible damages. Also, using the DNA data, we will estimate the absolute abundance and survival of cheetahs in Kenya.

Finally, the DNA obtained from the poo will be used to conduct a diet analysis using DNA meta-barcoding to see the prevalence of species in the diet and identify the extent cheetah is involved in human-wildlife conflicts

Two field assistants will help in tracking/spotting and identifying cheetahs, they will also help in technical duties, sample processing and transportation to the Kenya Wildlife Forensic Laboratories. An authorized wildlife veterinary officer will help in blood and tissue collection from individual cheetahs.

Laboratory equipment and reagents will be used to process and isolate the DNA from the samples. DNA will be sequenced and analysed and the result will be incorporated to the cheetah management plan in Kenya.

This research project is a great idea and will yield important insights to the greater conservation of cheetah population both in Kenya and Africa. The cheetah population in Kenyan is understudied and since they continue to face human-related challenges a multi-disciplinary conservation approach is paramount. David is my PhD student and perfectly positioned to carry out the research study. David has great understanding in wildlife biology, field work experience and skills and most important persistent, avid and conscientious in science. 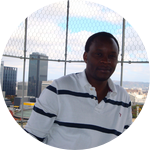 This research project started in February 2017 and is set to be completed by the end of 2020. All result generated from this work will be published in a thesis and in peer reviewed journals.

DNA analysis, write up and publication 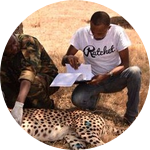 Hello! My name is David Thuo, i am a Kenyan-born and based wildlife biologist. Growing up in a remote area in Kenya I always saw, interacted and sometimes hunted (for food and fun) different wildlife species. When I was about 10 years old i participated in my first intensive wildlife count in our home area and that is how i got interested in wildlife and wildlife numbers, sadly for wildlife in our home area and Kenya in general the numbers have been going south over the years.

In an effort to save the remaining populations I full heartedly dedicated myself to study wildlife and educate the local communities on their role and impact to the ecosystem, over time I have realized research based approaches works the best. In my endeavor to foster human- wildlife coexistence I have obtained a B.Sc. in Wildlife Science and a M.Sc. in Conservation Genetics both from the University of Nairobi, Kenya which has specially trained me in sampling technique, wildlife behavior, ecology, statistics, molecular techniques and analysis, data collection and reporting. I have previously worked with the National Museums of Kenya’s Molecular Genetics Laboratory, Wildlife Clubs of Kenya and currently at the Mara Cheetah Project and I truly believe there is nothing more rewarding than seeing a peaceful nature where human and wildlife coexist.

This is my thesis project that I hope to finance with your help. All the results from this research will help in the overall conservation plan of cheetahs in Kenya.