The discovery of giant viruses, that are larger than bacteria and encode translational and metabolic machinery, is challenging the definition of a virus and what constitutes a living organism. Because giant viruses are so different, they have likely been overlooked in previous studies, hence their role in ocean ecosystems can only now begin to be understood. This project will find new giant viruses and characterise them, to inform studies examining their impact on ocean microbial communities.

The first giant virus discovered was so large it was mistaken for a bacterium, and was called Mimivirus as it "mimicked" bacteria. Later, Tupanvirus was found to encode many genes involved in translation, which normally are provided by the host cell. Giant viruses hence redefine what a virus is, and what differentiates them from cellular life.

Because of these differences, giant viruses will have been missed in studies isolating new viruses, as they are removed by filtration and other routine methods.

Because there are relatively few examples of giant viruses that have been isolated and characterised in vitro, establishing a mechanistic understanding of how they infect and replicate, and how this activity relates to their genes and proteins, remains a current challenge.

This project will isolate new giant viruses from water samples taken from the ocean. The genome, structural proteins, and host range of isolated viruses will be characterised. With this insight, the giant virus lifecycle can be described in more detail.

This understanding will inform our understanding of how giant viruses influence their marine hosts, and in turn nutrient cycles. We can then begin to ask how factors like ocean warming impact marine virus-host interactions.

This study aims to isolate and characterise novel giant viruses from the ocean. To isolate viruses, water samples will undergo enrichment in growth media, filtration and centrifugation. Genomic DNA will be extracted using standard viral DNA extraction kits and sequenced by Illumina. The size and content of the genome, and how this controls infection and assembly, will be assessed. The structural components of virions will be analysed using SDS-PAGE and electron microscopy, helping to explain the structural basis of assembly and infection. Genes and proteins will be assigned function using sequence alignment/BLAST and structure prediction, identifying which proteins are involved in which stage of the virus lifecycle.

Consumables (liquid media, biological buffers, DNA extraction kit, purification reagents, electrophoresis gel reagents, filter membranes): this will allow viruses to be isolated and produced, as well as assisting in their biochemical characterisation.
Small equipment (for concentration and filtration of environmental samples for enrichment of microorganisms, specialised growth flasks): this will facilitate the growth and purification of virus particles.
Equipment access (Next Generation sequencing of the DNA genome of successfully isolated viruses; microscope access): this will reveal the genomic sequence of successfully isolated viruses, allowing identification of the proteins that make up the virus and are critical for infection and replication, as well as revealing its overall structure and morphology.
Fees (8% platform fee and 5% payment processing fee).

Deeper understanding of giant viruses and their interaction with their microbial hosts is crucial for understanding their lifecycle and the impact they have on the wider marine ecosystem. This project proposal could begin to fill in the gaps in our knowledge of these interesting microorganisms, which up to yet have been seldom characterized. The expertise of Dr Bayfield has gained in structural biology, in particular the study of bacterial viruses, equip him with the skills necessary to address this vital research question. 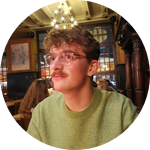 Ocean water and sediment samples will be obtained from coastal waters of the UK, covering the North Sea and the Atlantic ocean (minimum 20). A further set of samples from around the shores of the Baltic sea will be studied, allowing comparison with an ocean environment that has a different salinity and climate. A third set will be studied from a warmer and more southerly climate, off the coast of Portugal. 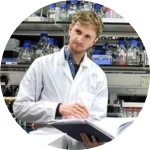 Oliver studied Chemistry at the University of York, UK, before undertaking a PhD in Structural Biology of viruses at the National Institutes of Health, USA. Oliver's main research concerns the structure and function of novel viruses that infect bacteria, particularly those that play a role in the health of the human gut. His wider interests include the philosophy of science and biological systems.

This research is a crucial first step in investigating the impact of giant viruses on amoeba and other microbial eukaryotes, and in turn on other marine organisms and processes. It lays the groundwork for future experiments, for example tracking virus-host population dynamics in the ocean with seasonal and climate changes. However, isolated members of this virus family must first be studied in vitro at the molecular level, as up to 70% of viral genes have unknown functions. Without this fundamental understanding of how giant viruses operate, hypotheses about the relationship between viruses and their wider marine ecosystem cannot be tested.