The technology discussed in this crowdfunding is about the production of autologous neurons, i.e., neurons derived from your own cells that can be retransplanted without rejection, for example in spinal cord injuries. Recently, a new class of RNA, called small activating RNA or saRNA, has been discovered and could be useful to produce autologous neurons. We propose here to test 2 candidates saRNAs that could activate the gene Ascl-1, a neural gene critical to produce neurons.

Degenerative and traumatic conditions of the brains and spinal cords often result in neural death. Previous attempts to replace these lost neurons by transplantation have used stem cells or neuron progenitors, but not autologous neurons, because these neurons were not readily available. In addition, technologies to produce autologous neurons by genetic engineering have disadvantages. Nonetheless, cell replacement therapies in spinal cord injuries, even with non-neural cells, show that the concept of cell replacement works and can improve the condition of patients. In this context, new methods of autologous neuron production are needed.

The transformation of non-neural cells such as skin fibroblasts into neurons is called trans-differentiation. To induce this trans-differentiation, non-neural genes must be shut down while neural genes must be activated. Traditionally this was achieved by introducing expression vectors that express specific sets of neural genes in cells. Unfortunately, these vectors also carry exogenous viral sequences. Here we propose to use a recently discovered new class of RNA, called small activating RNA (saRNA) to activate the neural gene Ascl1. Our method is an improvement since it doesn't involve any exogenous sequence and it only uses synthetic RNA technology exclusively.

The goal is to raise the level of expression, that is, the amount of messenger RNA (mRNA) of the neural gene Ascl1. In skin fibroblasts, Ascl1 is normally not expressed. Reports show that high levels of Ascl1 can transdifferentiate fibroblasts into neuron, which is the finality of this project. To do this, we will first transfect 2 candidates Ascl1 saRNA in cell culture in vitro. We will use a dedicated transfection system that we have used with success. Then we will measure the level of Ascl1 mRNA in these cells. This can be done at the individual cell level by in situ hybridization with an RNA probe antisense to Ascl1 mRNA and by immunofluorescence with anti-Ascl1 antibodies. Positive control for Ascl1 expression will be rat/mice neurons and chick embryonic neurons.

This experiment is part of a bigger project to generate induced neurons. The literature shows that Ascl1 activation is critical to that goal. Here, the budget includes 2 candidates small activating RNAs (saRNA) that will be tested for Ascl1 activation (i.e., increase Ascl1 mRNA) and all reagents for transfection plus Ascl1 expression measurement by 2 methods: in situ hybridization with antisense riboprobe and immunofluorescence with an anti-Ascl1 antibody. Funds also cover positive controls for Ascl1 expression (rat neurons). The project is estimated around 6 months in duration. All these experiments are built upon proven techniques that have been tested with success at NJN. Successful Ascl1 activation by this method will be useful for the entire neuroscience community as it will encourage the use of saRNA in general. For us, it is a critical step in the production of several neural types, including highly demanded motor neurons.

Richard Guillaume has been diligently working towards production of autologous neurons. Facilitating neural induction by synthetic RNA oligonucleotides is an interesting concept and I am eager to know the outcome of this study. I strongly believe this study will pioneer diverse neural induction strategies and will provide valuable insights to the research community. applications. 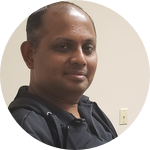 Vinod Uchil. PhD
Founder
Virtuous Sciences
I am really excited about this project and I belive it answers critical questions that may one day help patients with spinal cord injuries. 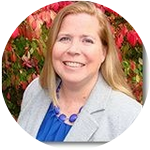 Initiation of neuralization with microRNA

Transfections with the two saRNA candidates on 1) plain fibroblasts 2) microRNA-induced only 3) microRNA plus RNA interference-induced, complete

Conclusion of experiment: were the 2 saRNA candidates able to raise Ascl1 transcript or not? A positive answer means success.

Provided successful outcome, we will proceed to patent filling, followed by submission in peer-reviewed journals for publication by late 2023 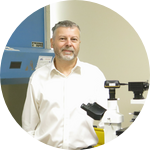 I am a molecular biologist with a long practical experience in the manipulation of RNA, which is critical for this project. I am first author in several peer reviewed publications of gene expression during embryonic development. I graduated with a PhD. in Molecular Biology from the University of Montreal, in 2000, followed by two postdoctoral appointments as a Fellow member, first at the Weill Medical College of Cornell University in New York and second at the UT Southwestern Medical Center of Dallas, Tx. A great part of my work consisted of analyzing RNA expression by in situ hybridization with antisense RNA riboprobes. I therefore feel capable to reiterate these techniques for this crowdfunding. In 2018 I founded New Jersey Neurons, LLC, with the goal of producing autologous neurons. Tremendous progresses have been achieved towards this goal, while only relying on private funds and donations. For example, in absence of a good substrate to support neural growth, I initially had to use chick embryos as hosts for induced neurons, however, recently I developed a gel that can fulfill this role advantageously, without animal-derived laminin. Removing animal-derived components from procedures is important for future clinical trials. I also developed animal-free formulations for the cryopreservation of neurons and skin biopsies. This allows the production of autologous neurons from biopsy samples performed remotely and shipped on dry ice. Lastly, neural induction by synthetic RNA oligonucleotides, as described here, is a new technology that should attract investors interested in neuron replacement therapies. It is my hope that these technologies will find applications in future clinical trials. 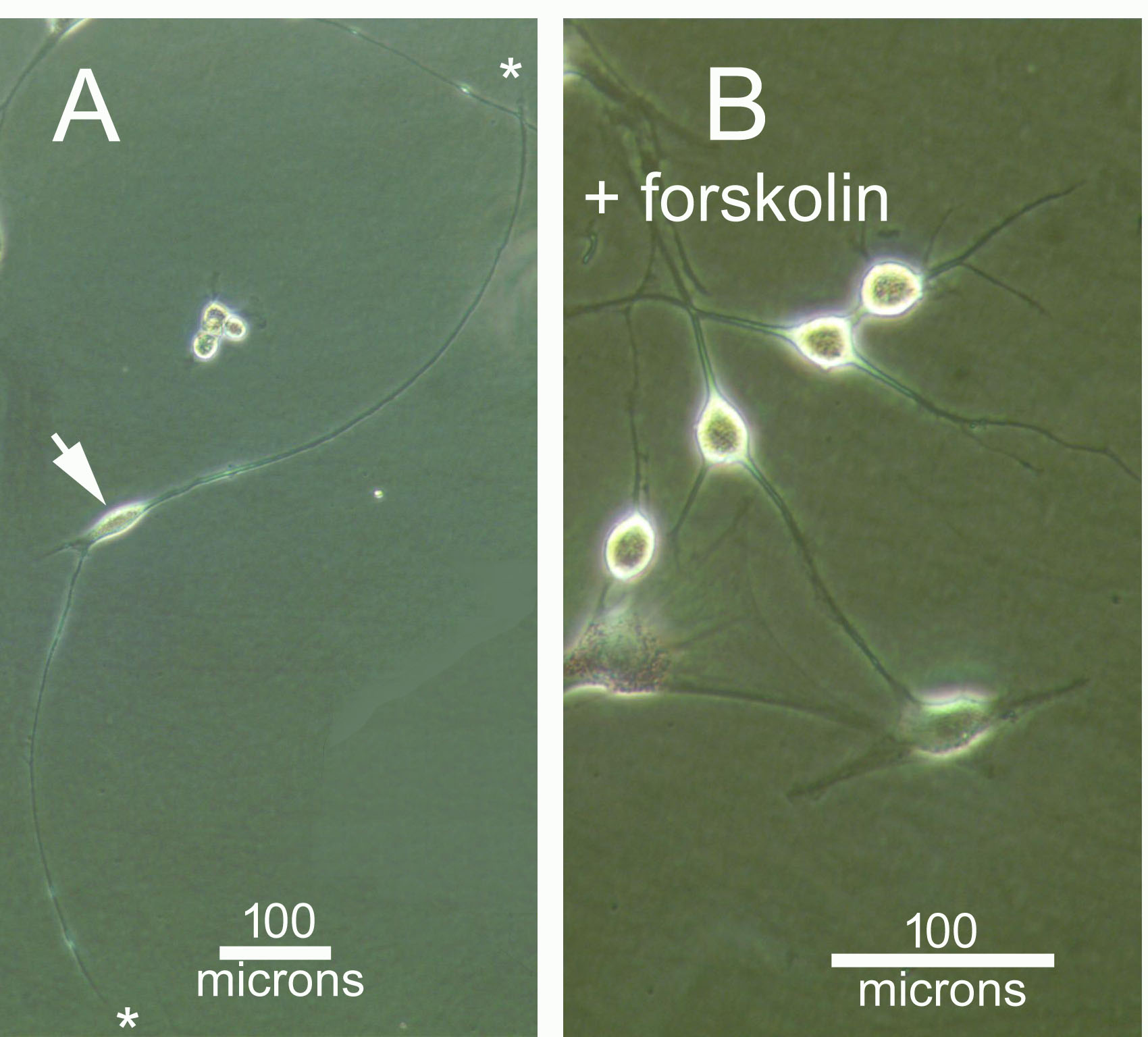 Figure 2. A Cumulative action of 2 components: microRNA and RNA interference. Cells have round bodies typical of immature neurons plus extremely long neurites in the millimeter range. B shows cells respond to forskolin by producing more neurites. Phase contrast

Figure 1. A shows initial fibroblasts in cell culture before microRNA transfection, shown here in phase contrast. Cells are flat will no neurites. B shows the same cells after microRNA transfection as a single component (no RNA interference). Cell bodies are rounded and appear bright under phase contrast. C inset shows induced cells with round body cell and neurite projections similar to immature neurons in the range 2-300 micrometers, light transmission. Bar: 100 micrometers

The rules to design a small activating RNA (saRNA) do not guarantee that this particular saRNA will indeed trigger the transcription of its target gene. Beside the saRNA sequence itself, other parameters like the binding site near the gene promoter, play important roles. A 50% success rate would indicate that at least two saRNA are required to have one working, which explains why we want to test two candidates in this crowdfunding. More would be desirable but outside the magnitude of this crowdfunding in money and time.

It is likely that inside skin fibroblasts, especially adult, the Ascl1 gene itself is well shielded in chromatin. In addition, Ascl1 promoter region may be protected from saRNA by protein complexes such as the REST complex (Response Element1 Silencing Transcription factor). Therefore, failure to increase Ascl1 mRNA directly from adult skin fibroblasts will not be surprising. However, we can transfect Ascl1 saRNA on fibroblasts that have been already induced into a neural phenotype by microRNA miR-124 plus additional RNA interference (RNAi) with small interfering RNAs (siRNA). MiR-124 is capable of chromatin remodeling and inhibiting the components of the REST complex, a known repressor of neural genes. By removing REST and other neural inhibitors, MiR-124 pre-treatment could therefore facilitate saRNA access to the promoter region of Ascl1. In fact, these 'pre-induced' cells (resulting from microRNA and RNA interference, shown here in the pictures above) resemble neurons much more than fibroblasts which suggests that some chromatin remodeling has indeed occurred. This is in agreement with several reports that miR-124 alone can transdifferentiate fibroblasts into neurons. The order in which gene activation and inhibition are performed also matters, since we will use three components (microRNA, siRNA and saRNA).

In fact, action of the single component "microRNAs" (including miR-124, another microRNA, and small molecule forskolin) is sufficient to induce a neural phenotype, as shown above in figure 1. But when RNA interference is added as a "second component", induced neurons now exhibit very long neurite projections, figure 2. The longest neurite was measured at 1.2 mm after only 2 days past transfection, and on a plain plastic plate! This could be a useful feature in future transplants in injured spinal cords where axon projection, remyelination and synaptic reconnection are expected to take place. Figure 3 shows that 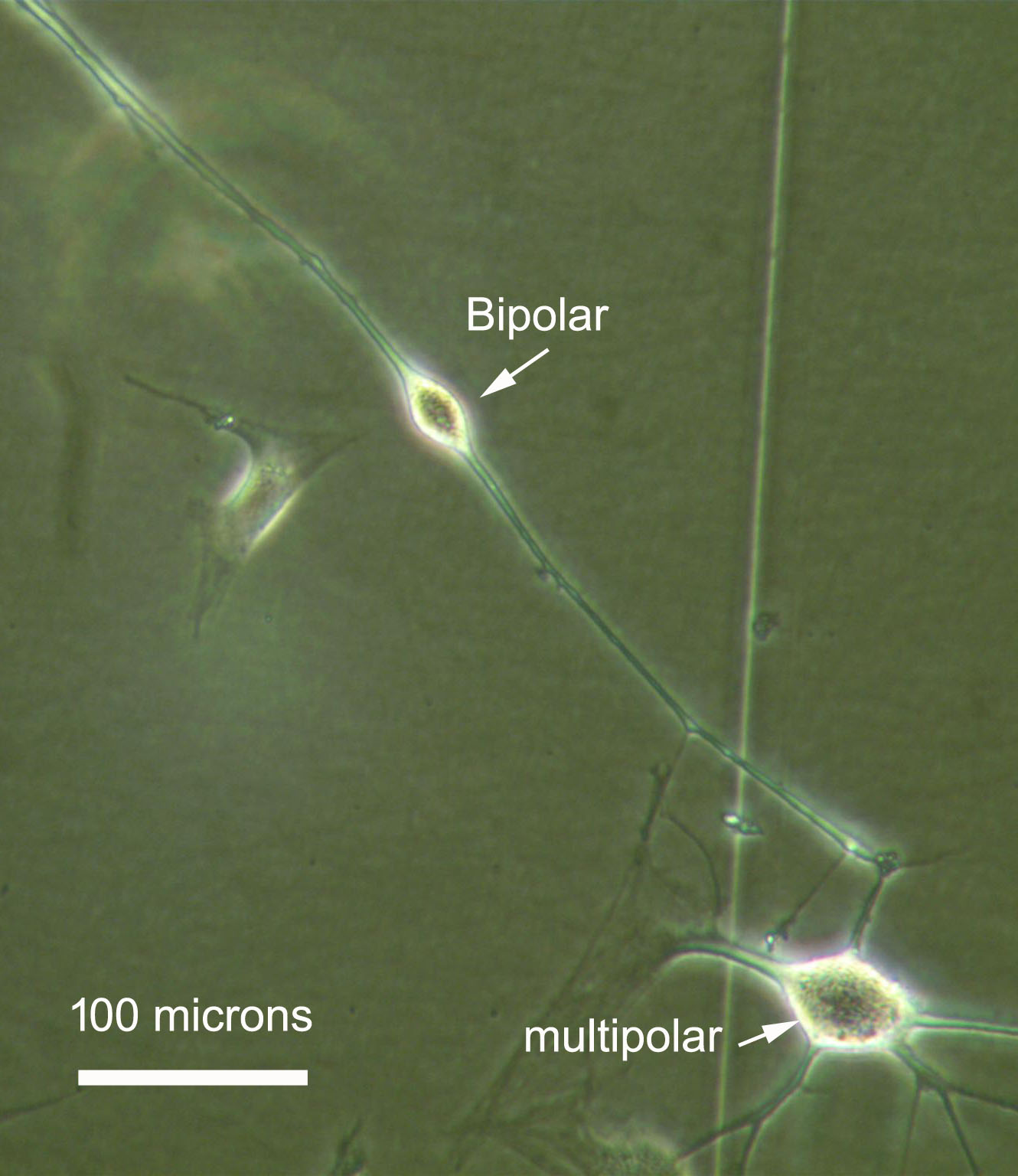 several neural types are produced, with bipolars being the most common type, suggestive of sensory neurons, and rare multipolar-like induced cells. This is likely a consequence of starting from a heterogenous cell population that expends from a biopsy. By contrast, the budget for this crowdfunding covers the cost for a homogenous skin fibroblasts culture, which should accordingly produce a single type of induced neurons. In this context, RNA activation with saRNA would be the "third component" added on top of this neural induction strategy.

There are several rationales to activate (or activate further) Ascl1 on cells that seems to be already well engaged into a neural differentiation pathway. Firstly, to produce an irreversible neural phenotype without any residual fibroblast and immature surface markers left, in order to eliminate the immunogenicity of these induced neurons. Secondly, to obtain several neural types, in particular motor neurons. Thirdly, to increase the neural induction efficiency to produce more neurons and finally as a test bench for similar RNA activation with saRNA, but targeting other genes.