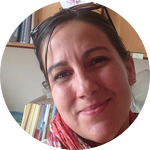 Originally from Santiago Chile, she studied Veterinary Medicine at University of Chile in Santiago, including an Internship in Pathology at the School of Medicine at the same University, graduating in 2004. In 2005 she was awarded a Barron Fellowship to enroll at the Master in Preventive Veterinary Medicine (M.P.V.M) at UCDavis. There, she worked at the Anatomic Pathology Laboratory and studied the mortality causes of oiled waterfowl and seabirds. After being awarded a Marie Curie Fellowship in 2006, she started a Ph.D. in Hannover ,Germany at the University of Veterinary Medicine in the Systems of Neuroscience Program (ZSN), looking for the immune response in the central nervous system and lymphoid organs in a murine model for multiple sclerosis.

In 2010 returned to Chile and moved to Valdivia to work as an Assistant Professor at Universidad Austral de Chile, to teaching and to do research and diagnostics in the field of animal pathology. Some of her research lines relate to marine mammal pathology, antibiotic resistance and emerging diseases in domestic animals and wildlife. Her favorite projects involved the study of diseases and death causes of sea lions in Chile (Isla Guafo and Valdivia). She is currently an Assistant Professor at Ross University School of Veterinary Medicine in Saint Kitts and Nevis.

Finally, she is devoted to science outreach and communication, participating in several projects to bring science closer to the public, especially to kids. While in Valdivia she coordinated a radio program “Sed de Ciencia", she was the curator of a small exhibition of stuffed animals with abnormalities and parasites from the Pathology Institute, and -together with Francisco Muñoz- she was the principal investigator on a project that created and organized Scientific Tour Routes .