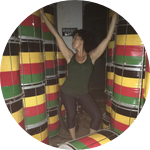 Over 10 years of experience in assay development and systems integration for automated bio-detection systems. At Lawrence Livermore National Laboratory served as technical lead in the Chemical and Biological National Security Program in the Bioassays Group and played a lead role in the development efforts for several federally funded projects focused on automated multiplexed assay detection for both human and animal pathogens.

The qPCR and multiplexed assays described can be used for the simultaneous detection and differentiation of multiple DNA and RNA viruses in a single sample with the ultimate benefit of savings in both time and money, compared to traditional single tests for infectious agents. In an event of a disease outbreak, this assay approach can also be adapted to high throughput processing using robotic sample handling and could enhance preparedness and response capabilities of both state and federal diagnostic laboratories.