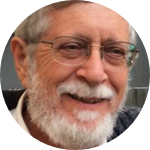 I woke up one morning in the early 1980s, realizing that I could look into my skin with a microscope to see the 3D structure of a beauty spot (nevus). I tried it on myself, and it worked. About one in 100,000 nevi turn into a cancer called melanoma. Thus the first 3D nevoscope was prototyped. Nowadays, with faster computers and advanced digital cameras that replace microscopes, my dream of detecting melanoma before it spreads (metastasizes) is possible. With my excellent collaborators, we hope to make home skin scanning a reality.

I was a professor at the University of Manitoba in Winnipeg, Canada from 1978-2011. I’m now “retired”, collaborating with mostly younger scientists around the world, volunteer as a scientist for the Gulf Specimen Marine Laboratory in Panacea, Florida, and hold an adjunct position in the Department of Obstetrics & Gynecology at Wayne State University. I wrote the first paper on diatom nanotechnology founding that field and started adaptive image processing. I’ve published on algal biofuels, computed tomography algorithms, AIDS prevention, neural tube defects, embryo physics, astrobiology and research and social ethics. I’m also Book Series Editor of: Diatoms: Biology & Applications and Astrobiology Perspectives on Life of the Universe (Wiley-Scrivener), and an Associate Editor of the science journal BioSystems.