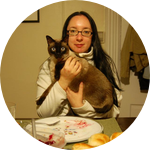 About
Like a lot of people, I found my high school chemistry course to be overwhelmingly incomprehensible. I recall enjoying my physics course, but my report card clearly indicated that said physics course didn’t reciprocate the feeling. I had no problems with my life science courses, so upon arrival on campus as a college freshman I proudly declared myself a biology major. I quickly realized that while biology was interesting, I missed the problem solving inherent to chemistry and physics. My small liberal arts university didn’t offer physics major, so I decided to give chemistry another shot.

As part of an internship-style graduation requirement, I spent a summer working in an academic research lab at Penn State University. There, I discovered STM, a technique that combines aspects of both chemistry and physics and that is actually very similar to one of my hobbies, photography. I became hooked and never looked back. After graduating with degrees in Chemistry from Monmouth University (in NJ) and the University of California, San Diego, I eventually rounded out the collection with a PhD from North Carolina State University.

When I grow up, I want to be an astronaut. While waiting for a viable ride into space, I spend my days on the Ohio State campus, tinkering in the Physics building, teaching chemistry to large masses of undergrads, co-advising both the Chemistry Club and the Jump Rope Club, running a blog about life in physics, and in general trying to convince people that chemistry and physics, when given a chance, can be a much more fulfilling adventure than what we typically encounter in high school.
Joined