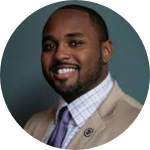 Riean K. Norman received his bachelors degree in Political Science from University of West Georgia in 2007. At UWG, he was heavily involved in Black Men with Initiative, an organization focused on African-American retention in higher education.

In 2009, Riean was admitted to the Paul M. Hebert Law Center at Louisiana State University. Riean was the recipient of multiple academic scholarships and earned his Juris Doctors degree and a Diploma in Comparative Law in 2012.

That same year, Riean begin his career as an energy professional at one of the world's largest publicly traded oil and gas companies

In 2014, Riean was selected as one of Pittsburgh’s 50 Finest. Pittsburgh's 50 Finest are 50 of the city's most accomplished men and women. These outstanding professionals are selected on the basis of the activity in the community and success in their careers

In 2015, Riean co-founded Society Men’s Grooming Lounge, LLC in Pittsburgh, PA. Society is not only a high-end men’s barbershop, it is also an important community staple for helping develop the character of young men.

In 2016, Riean was selected as Pittsburgh’s Fab 40. This award honors the achievements of young African-American professionals and their commitment to reaching back to elevate youth.

That same year Riean organized a group of energy professionals to re-activate the Pittsburgh Chapter of the American Association of Blacks in Energy (AABE). Through AABE, Riean and its members sponsored student events focused on STEM education and provided objective information to inner city communities about the energy industry.

In 2017, Riean transitioned to Atlanta, GA to further his career in the energy industry by taking a position in project development at the world's largest renewable energy company.