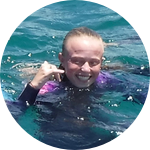 University of Hawai'i at Mānoa

I grew up in Southern California close to the beach, but I fell in love with the ocean, its vastness, and its beauty, in Hawai'i. Before moving to O'ahu in 2015, I had visited the Hawaiian islands around 20 times. I mainly visited the Big Island & Maui, however had also been to Moloka'i, Lana'i, and Kaua'i.

I began studying Marine Biology at Orange Coast College in Newport Beach, California in 2013. While there, I was president and cofounder of the Marine Science Honor Society (Eta Eta Omicron).

During that time, I was a professional volunteer for the Laguna Ocean Foundation working as a tidewater docent, as well as an intern at the Boeing Company for the Unmanned Autonomous Underwater Ocean Systems.

After transferring to the University of Hawai'i at Mānoa in 2015, I joined the Marine Option Program and obtained my NAUI Open Water diving certification. I completed my directed research under Dr. Hunter at Moku o Lo'e (Coconut Island) on coral reef ecology and health status through the University of Hawai'i, funded by NOAA. I then obtained a boating license in the state of Hawai'i. I went on to intern in the Marko Lab, mainly doing library-prep molecular work on coral species.