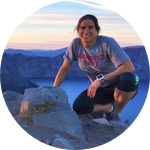 Carla received her DVM in 2001 from the University of Zurich in Switzerland where she was born and raised. She was then accepted into the Graduate program at the University of Bern (also in Switzerland) to pursue a doctorate in Veterinary Medicine. Over the next three years she researched a kidney parasite (Tetracapsuloides bryosalmonae) in Brown trout and its relationship to water temperature while evaluating and establishing different diagnostic protocols. During that time frame, she was also involved in diagnostic duties (mostly bacteriology and necropsies) at the Fish and Wildlife Center of the College of Veterinary Medicine in Berne. After receiving her doctorate, Carla spent the next 6 years in private practice as a large/mixed and small animal vet and served as the president of the veterinary association in the north-west region of Switzerland. In 2009 she moved to the USA to once again go back to Grad school and pursue a combined PhD/residency program in Immunology and Infectious Diseases and the residency in Veterinary Anatomical Pathology from Washington State University. Carla researched a putative probiotic that was isolated from the gastrointestinal tract of healthy rainbow trout and identified the genes responsible for the expression of an antimicrobial peptide that was effectively inhibiting Flavobacterium psychrophilum, the etiological agent of the devastating Coldwater Disease in Salmonids. After receiving her PhD for this work, she was offered a position as a postdoctoral scholar at the Department of Biomedical Science in Claudia Hase lab beginning of 2015.