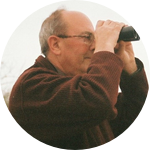 Ever since I saw my first Crested Caracara at the Santa Cruz Flats in 2003, I've been curious about their movements and distribution in Arizona. For a long time I've been maintaining a data sheet recording their appearance throughout the state. In 2014-15 I prepared an article summarizing what's known about this species in Arizona, Crested Caracara in Arizona: Background and Recent Expansion. Jenness, D. 2015. Arizona Birds Online. http://www.azfo.org/journal/CR...I was a founding member of the Arizona Field Ornithologists in 2005 and have been active on its Board of Directors ever since.