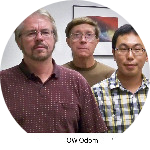 University of Texas At Austin

About
David L. Herrin is currently Professor of Molecular Biosciences at UT-Austin. He first joined the University in 1988 as an Assistant Professor of Botany, after completing his PhD and postdoctoral training at the University of South Florida and University of Georgia, respectively. He studied chloroplast and plant molecular biology using Chlamydomonas, since he was a graduate student. The Herrin lab's research has been supported by grants from federal agencies, state agencies, and private foundations.

Seongjoon Kang joined the Herrin lab as an undergraduate researcher in 2008. After obtaining his Bachelor's degree in 2009, he entered the Plant Biology Graduate Program and continued in the Herrin lab as a PhD student. He received his PhD last year from UT-Austin, based in part on his accomplishments with this project. Indeed, Seongjoon's success in producing Chlamydomonas strains that produce single Bti proteins, together with his keen interest in providing a public health solution, have propelled him to continue working on this project as a postdoctoral researcher.
Joined