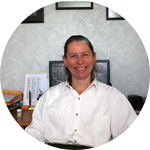 I am Denise's Ph.D. advisor at the Life Sciences graduate program, CICESE, Mexico. We have been working together since 2002 in several projects regarding marine mammals, so I can say I know her well and she's incredibly committed to every task she embraces.

My career in marine mammalogy started in 1990, when I studied a bottlenose dolphin population in Veracruz, Mexico, for my undergraduate thesis. I graduated in Biology at the National Autonomous University of Mexico in 1992. Then I moved to Ensenada, Baja California, to continue my graduate studies in Oceanography at the University of Baja California. For my master's thesis I studied the evasive behavior of spotted and spinner dolphins during fishing for yellowfin tuna in the eastern tropical Pacific. During my Ph.D. my research was focused on the effects of whale watching boats on the behavior of migrating gray whales along the coast near Ensenada, and I proposed a management program for this tourist activity. Also during my Ph.D. I co-founded an NGO to respond to marine mammal strandings and later on we started an environmental education program regarding these fascinating animals and their conservation problems. I graduated in 2001 and since then I am a professor at the Ensenada Scientific Research and Higher Education Center (CICESE, for its Spanish acronym).

My research interests have expanded to many marine mammal species, their biology, ecology, and conservation issues. California sea lions and Pacific harbor seals have been my focus during the last four years, although I have advised many graduate thesis regarding other species.

Where are the Pacific harbor seals in Mexico?

Denise previously mentioned we would do aerial surveys to photograph harbor seal colonies for abundance estimation. This has been completed! We surveyed all the islands and archipelagos (about nine...

News from the field

Since May 17, Denise has been out there on Todos Santos Island, Baja California, Mexico, capturing adult harbor seals. It has been very difficult, because these animals are very sensitive to distur...