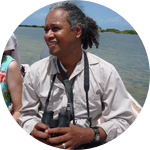 Past President, BirdsCaribbean and Lecturer, University of Chester

Over the past 2 decades my conservation work has taken me from the NGO sector as CEO of the Asa Wright Nature Centre, to government as an environmental policy specialist in Trinidad and Tobago’s Ministry of the Environment, and subsequently in academia, at the University of the West Indies-St Augustine and currently at the University of Chester, UK.

My areas of research include sustainable use of tropical wildlife, tropical forestry, endangered species management, conservation on island ecosystems, and sustainable livelihoods & community based conservation.

My involvement interest in this project began as the outcome of a workshop I chaired at the 2014 BirdsCaribbean biannual meeting in Jamaica. At that session, all the participants realised that we were beginning to see a troubling pattern among forest endemic birds of the region – we were lacking some of the most basic kinds of population information, we needed to actually conserve these birds. This project is a direct outcome of that meeting – and an effort to begin to address this issue.