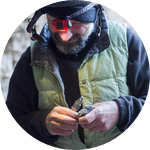 Bird Conservancy of the Rockies

I have worked with Black Swifts throughout the western United States since 2001 for the Bird Conservancy of the Rockies. During this time I have co-authored three manuscripts focusing on Black Swift research in the Wilson Journal of Ornithology. A highlight of our research was when the results of a 2012 manuscript were accepted by the Brazilian Committee on Ornithological Registers as confirmation that Black Swifts occupy Brazil and the species was added to the official bird list for that country.