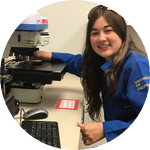 I have always been fascinated by pollution in aquatic ecosystems because I grew up along the Ohio River, one of the most polluted rivers in North America. I spent my summers collecting trash along streams, catching fish (but not eating any), and wishing I could swim in the river without occasionally developing a rash.

I received my B.S. in environmental toxicology from UC Davis, where I learned from world-leaders in topics like pesticide residues in table crops and the toxicity of hydrocarbons after large oil spills. This inspired me to complete a summer research project at the UC Davis Bodega Marine Laboratory on the toxic effects of oil dispersants to hydrocarbon-degrading microbial communities.

After graduating, I returned to the Ohio River where I completed an internship in aquaculture and biological monitoring before accepting a position as an aquatic ecotoxicologist at an environmental consulting firm. I gained extensive experience in marine and freshwater aquatic toxicity testing and sediment toxicity testing.

Since 2018, I have been employed as a Research Associate in Dr. Jenessa Gjeltema's HEAL (Health Effects of Anthropogenic Litter) lab at UC Davis. I have become an expert on microplastic extraction and analysis using Raman spectroscopy - the gold standard method for chemically identifying the smallest microplastics. Our work on method development for semi-automation of our Raman confocal microscope was presented at the Society of Environmental Toxicology and Chemistry North America annual meeting in 2019. We have a manuscript in progress reviewing scientific literature for everything that is currently known about the presence and health effects of microplastics in marine mammals.

I am very excited to be starting my graduate studies in agricultural and environmental chemistry in Fall 2020. I intend to research the interactions of other pollutants with microplastics as well as the leaching of plastic additives from microplastics into aquatic environments.

We reached our minimum goal! Thank you!

We have officially reached our goal of raising $4,958! A huge THANK YOU to everyone who has supported this project by sharing or donating. You have directly contributed to the future of this import...

How can you help reduce microplastic pollution?

We have all seen dramatic photos of the effects of plastic pollution on marine life, like a straw stuck in a sea turtle’s nose and garbage bags in the stomachs of stranded whales. Plastic that ente...