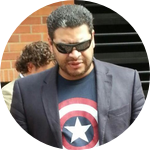 Colombia is considered to be country with the second biodiversity of the planet, with almost 62.829 species and counting, Colombia houses 805 species of amphibians. Making of Colombia the second country in number of amphibians after Brazil.

The passion for science, mainly for biology, guided me to follow studies in biology in Colombia during the 90s. Soon after I finished my undergraduate training in Biology, I traveled to France to continue with my scientific training, accomplishing a master’s degree in experimental surgery and a PhD in cell signaling for my work in cell therapy for liver diseases at the University Paris XI in the year 2006.

In 2007, I realized that regenerative medicine is still far for being a bench side technology for the humankind; this motivated me to move to work on regenerative biology. I have had the amazing opportunity of working as a postdoctoral fellow at the University College of London (UCL), UK, under the mentorship of professor Jeremy Brockes, a world leading expert in salamander limb regeneration.

In the year 2011 I came back to Colombia to set up my lab and started my career as independent PI, at the Institute of Biology of the University of Antioquia. Currently my lab focuses in the study of amphibians of the biodiversity, mainly Plethodontid salamanders and tree frogs.

Nowadays we are putting enormous efforts to identify, isolate and characterize new molecules form the skin of Colombian amphibians that could harbor anticancer and antimicrobial activity, and even molecules able to induce cell regeneration.

New bioactive peptides from skin of a colombian frog