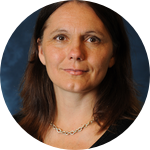 Associate Professor, Wesleyan University, Department of Dance and College of the Environment

I am Associate Professor in the Department of Dance and College of the Environment at Wesleyan University in Connecticut. I've worked with somatic practices and social somatic theory for over 20 years since earning a Ph.D. in Somatics and an MA in Political Science. I have published articles and a book on the significance and impact of physical and creative methods in education.

My family origins are in Ukraine, but my work in somatics has taken place exclusively in the United States. With the recent Revolution of Dignity in the Winter of 2013-2014, and the subsequent war on the border with Russia I saw the possibility of applying my expertise in a new context. I found myself well positioned with the experience, cultural familiarity and language skills to help in the war relief effort. I travelled to Ukraine in the Summer and Fall of 2015 to offer seminars in somatics to groups of psychotherapists and social workers who were volunteering their time to work with refugees and soldiers. These volunteers were seeking new effective methods to help meet the acute and overwhelming needs of the war-ridden context. I was initially hosted by three organizations that had emerged to help organize trainings and relief efforts in response to the surge of interest in Ukraine in civic engagement and volunteerism. The somatics seminars were met with enthusiasm and I have been invited back and asked to provide seminars geared more specifically to various populations including refugees, children, volunteers, soldiers, and officers. Together we are assessing the most effective ways to apply somatic education to alleviate the crisis caused by the war.

Katja's pledge activity based on country

Projects that Katja funded that have shared project outcomes