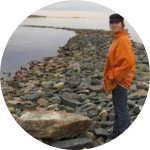 About
Kimberly C. Meehan is an adjunct associate professor at Hunter College with the Department of Geography-Earth & Environmental Science. She earned her Ph.D. with the CUNY Graduate Center under advisement of Neil Landman at the American Museum of Natural History, New York. As a paleoecologist, Kim has interest in both the physical and biological aspects of environments. Current research includes analysis on biodiversity shifts of macrofossil assemblages and their host carbonates through time in methane cold-seeps of the Cretaceous in Western Interior Seaway (WIS), and investigations into benthic foraminiferal populations of ancient methane seeps and coeval localities of the WIS. Kim also has worked on Burgess Shale-type preservation of Cambrian algal fossils from the Wheeler Formation, Utah, and investigations involving geochemical proxies for oxic/anoxic conditions and their roles in soft bodied preservation.