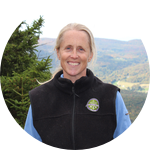 I am a conservation biologist with Audubon Vermont's Endangered Species Recovery Program and Champlain Valley Bird Initiative. I work with private landowners to promote management activities that enhance grassland and shrubland habitats for priority bird species in the Champlain Valley. Most recently, I have been participating in a national effort to study Golden-winged Warblers, and helped put geolocators on 37 golden- and blue-winged warblers in the southern Champlain Valley in the spring of 2016. I also surveyed many of the Vermont fields enrolled in the Bobolink Project in 2016.

Prior to coming to Audubon in 2009, I coordinated peregrine and bald eagle recovery efforts in Vermont. I continue to be involved in the recovery efforts of these species. I obtained my Master's degree in wildlife biology from the University of Vermont, where I studied the population of double-crested cormorants on Lake Champlain.