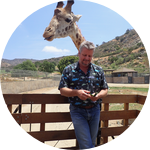 University of Hawaii at Manoa

I have worked extensively in invasive insect management using various biological approaches including semiochemical technology, specifically repellants for some of the most severe insect pests of crops, and the role of semiochemicals in host-location and mating behaviors in biological control agents. I've contributed to research on conservation of insects in South Africa and internationally, through work on biodiversity patterns, insect-plant interactions and safety assessments for biological control of invasive species. I teach insect ecology, biological control, and conservation biology. I initiated the work on honeybee alarm pheromones as potential African elephant management tools and conducted the preliminary field trials upon which this proposal is based.

in total, I have published 107 peer-reviewed papers and book chapters on invasive species management, insect ecology, and conservation biology.