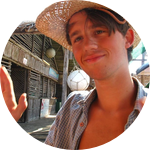 Rob is currently in his third year of his marine biology integrated masters degree, which he will complete in 2018 at the University of Southampton. Since watching grey whales and Orcas off the Pacific Coast of Washington State at the age of 6, he has always been fascinated by the marine world and the life in it.

His exploration of the oceans was increased through the achievement of his PADI open water certification (2010, Kas, Turkey) and advanced open water (2015, Guinjata, Mozambique) and has allowed underwater experiences with enigmatic animals such as the humpback whale, elasmobranchs and turtles.

Rob gained a vast amount of experience in the marine conservation world as a volunteer with the marine conservation organisation Love The Oceans in 2014. He gained insight into elasmobranch conservation whilst working with the shark fishermen of Guinjata and was lucky enough to witness a female humpback whale and her young calf. These experiences, particularly the whales, instilled in Rob a desire to study the migration of humpback whales past Guinjata and promote ecotourism in the area.

Conservation is one of Rob's greatest passions and has led him to aid conservation groups both in the UK and abroad.

Rob can be directly contacted at: rt6g14@soton.ac.uk