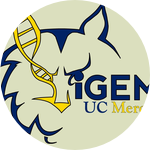 About
UC Merced iGEM's team was founded last year in the summer of 2012 between what was, initially, a small group of natural sciences and engineering students. Usually, the majority of iGEM's teams are supervised and directed by faculty members. However, at UC Merced the students conduct both supervision and oversee the direction of the project with faculty members playing only an advisory role. Everything you've read about so far: the plan, the project, and the experiments conducted was carried out entirely by undergraduate students.

This style of organization in our team provides an amazing opportunity to university students to encounter, first-hand, the intricate details of what exactly goes on in university-level research before, during, and after by engaging students in every area of research. This new approach fosters the next generation of scientists to a higher caliber and standard.
Joined