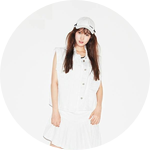 One of the most anticipated female groups in recent years will be certainly Weki Meki. A band of South Korean genre of music called K-Pop is very popular nowadays especially among young people. The group debuted with a cool song I don’t like your girlfriend and suddenly became a hit around the world. After Psy, BTS and other male artists it’s time for a girl band.

Weki Meki released three albums so far in various types and sizes: Weme, Lucky and Kiss, Kicks. The releases are full of original photos, lyrics and kind words toward the fans. The packages are full of merch as a bonus to the CDs. Every Korean label tries to please their customers by adding some precious items and make them interested enough to look forward to future releases.

The group consists of Rina, Lua, Lucy, Elly, Suyeon, Sei, Yoojung, Doyeon and Lucy who is the youngest of them all. Doyeon is known for taking part in a Maybelline New York advertisement campaign among many famous international models. She is also an actress. The girls are hardworking and always give everything during performances, photo shoots and try to give back the love they receive.

They reached more than 7 million views on Youtube with La La La and 6 with Crush which is their latest song. During the Winter Olympics in 2018 they released a special version of a song Butterfly to promote the event. They successfully reached to many people and convinced them to watch sport events on the television and Internet.

Weki Meki were nominated in many different categories at the Mnet Asian Music Awards and Melon Music Awards and they received a prize at the 2018 Korean Culture Entertainment Awards in a K-Pop Singer Awards category.