The goal of this research project is to produce gasoline and jet fuels from lignin biomass using catalytic fast pyrolysis.

Lignin is the glue that helps keep plants and trees limber and protects their structure against biological decay and the environment. Lignin is typically separated from cellulose in current second generation biofuel production in order to better utilize cellulose for conversion of bioethanol. Fast pyrolysis is the thermal, anaerobic degradation of biomass that will produce a reddish-brown bio-oil. However, bio-oil from lignin is very corrosive and highly oxygenated, which leads to a low performing fuel.

Lignin is the second most abundant source of renewable carbon on the planet and it is expected to have a much higher energy potential than cellulose*. However, no processes, either biological or thermochemical, have been able to fully utilize this resource so research has shifted away from using lignin.

There is an excellent opportunity to study lignin and catalytically convert it into a useful commodity like gasoline and jet fuel. We want to take advantage of natural lignin chemistry, implement novel catalysts, and use clever engineering to help reach this goal of producing fuels from lignin biomass.
*= refer to the Van Krevelen diagram below 1

Supply and Demand
By 2050, demand and consumption of transportation fuels is expected to increase by 100%2. At the same time, fossil fuel reserves are limited and are expected to run out within the next century 3. This looming fuel shortage has pressed the United States Department of Defense and the European Union into setting mandates on industrial production of biobased fuels by 2020; 570 million gallons of jet fuel and 10% of fuel from each European member state must come from biofuels, respectively2,4.

Green Fuels
Biofuels are considered carbon neutral. This means that the carbon dioxide that is produced from biofuels returns to the plants and trees that were used in the process, leading to a natural recycling flow of carbon. This is very important for the environment as this will help prevent global warming.

The Pacific Northwest is becoming a major player in second generation biofuel production because of the high population of hybrid poplar in the region. These trees are expected to play a major role in future fuel production, and it is necessary to be able to convert the cellulose, hemicellulose, and the lignin from these feedstocks to improve their economic viability. The Resende research group at the University of Washington is looking at unique thermochemical approaches to help contribute to this global and environmental cause.

This funding will be dedicated to purchasing miniature laboratory scale batch reactors from Parr Instruments and analytical equipment.

With your support, I will be able to conduct bench scale experiments using a microscale catalytic reactor to produce lignin-derived gasoline and jet fuel. 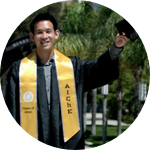 Oliver Jan
Ph.D. student at the University of Washington

My fascination with biofuels started from a strange, yet awesome thought: "it'd be great to convert human waste into energy." This led me to a research path into recycling spent nuclear fuel for precious metals and ultimately into converting trees and agricultural crops into transportation fuels. Looking at waste and finding a practical use for it is what I strive for.

Interested in learning more about my research group? Check out our group research page:

My fascination with biofuels started from a strange, yet awesome thought: "it'd be great to convert human waste into energy." This led me to a research path into recycling spent nuclear fuel for precious metals and ultimately into converting trees and agricultural crops into transportation fuels. Looking at waste and finding a practical use for it is what I strive for.

Interested in learning more about my research group? Check out our group research page:

[2] Catalytic fast pyrolysis will be performed on extracted lignin from softwoods, hardwoods, and agricultural crops. Results on bulk lignin will be compared to the results from the monomer studies.

These results will be compiled and submitted to scientific journals for review and publication. Results will then be published openly for backers to see.


Pictures of our bio-oil will be uploaded so that everyone can see the actual liquid products that we are generating. This Van Krevelen diagram points to lignin-derived pyrolysis products being the closest to that of crude oil.