African American men who have sex with men (MSMs) are at higher risk for new HIV infections in rural communities and most likely to be under diagnosed. We hope to explain the reasons for this disparity in order to help public health officials craft better intervention strategies to prevent the spread of HIV. Funding will enable us to collect baseline data on HIV risk perceptions, behaviors and testing practices in MSMs living in rural Louisiana.

Within MSMs, African Americans are infected and under diagnosed at rates 3- and 6-times that of other races and ethnicities. These trends are especially notable in Louisiana, where 62% of 74% of new HIV cases in 2011 were in MSMs and African Americans, respectively; of the new MSMs diagnosed, 64% were African American.

Persons living in rural locales face unique barriers to care such as difficulty with transportation, reduced numbers of healthcare providers, lower rates of health insurance, and higher rates of stigma and discrimination than their urban counterparts.

Given the high incidence and prevalence of HIV in MSMs, the expansion of HIV into rural communities, and the unique barriers faced by rural persons seeking healthcare, information on MSMs at risk for or infected with HIV is needed. MSMs in the rural South face unique barriers due to societal discrimination (fear of losing friends/family/job from being “outed”) and a lack of state or federal laws prohibiting employment and/or marriage discrimination.

For these reasons, information on this population is often hard to obtain or is incomplete. Our study strives to gather as much data on this population as possible without sacrificing anonymity or putting participants at risk for discrimination. We feel this data will help us steer desperately needed HIV intervention efforts for MSMs in central Louisiana.

Our aim is to collect baseline data on HIV risk perceptions, behaviors, and testing practices in MSMs living in rural Louisiana.

This will be done with two anonymous surveys: the first will be given to all HIV-positive men at our local HIV clinic (The Tulane University Medical Group’s CD4 Clinic), the second will be given to men in the community at a Lesbian, Gay, Bisexual, and Transgender (LGBT)-friendly coffee shop in downtown Alexandria, Louisiana, or online via Survey Monkey (for anonymity reasons).

We plan to advertise the online survey and testing day on Facebook sites, Craigslist Central Louisiana and other social networking sites.

We are surveying all males and not just “gay males” as not all MSMs identify as gay or bisexual, and our survey is designed to capture risk behavior and not necessarily sexual orientation. Once the data is collected and analyzed, we will use it to target HIV testing and intervention efforts in rural central Louisiana.

The budget will pay for $5 coffee shop gift cards that we plan to distribute to survey participants. If we meet our stretch goal, we will be able to enroll more participants ( the current budget allows for 100 participants), and expand recruitment efforts on popular MSM social media aps (Grindr, Manhunt, etc) which charge a premium for advertising or survey research. 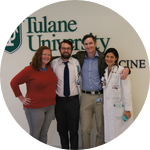