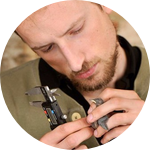 I am an evolutionary ecologist and an environmental toxicologist working at California State Polytechnic University, Pomona. I obtained my PhD in ecology from the University of Milan, in Italy (2010), and then moved to the United States as a postdoc first at University of South Carolina, and then at Louisiana State University.

I have been to Fukushima multiple times starting in 2012. Before the 2011 nuclear disaster, I had been to Chernobyl several times.

The Dogs of Chernobyl Research Initiative