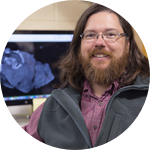 About
In 1996, Dave began his work in vertebrate paleontology at the Tate Geological Museum where he practiced lab techniques that ranged from fossil vertebrate preparation to molding and casting. After earning three Bachelors of Science (Biology, Geology, and Zoology) from the University of Wyoming he earned a Master's in Biogeochemistry. Dave took a hiatus from graduate school to take over the directorship of the Big Horn Basin Foundation where he initiated several key programs, including one that provides high school aged students college credit during a week-long intensive introduction to the science of vertebrate paleontology. That program is still running successfully.
Dave finished his Doctorate in Geology from the UW-Madison, where he then accepted a position as a research scientist at the UW Geology Museum. For the last decade Dave has been focused on a multi-disciplinary approach to vertebrate paleontology. His mesozoic publication record includes detailed descriptions of paleosols, paleoenvironmental reconstructions, vertebrate morphology and phylogeny, geochronology, computed tomography, congenital malformations in the fossil record, taphonomy, paleoecological modeling, and terrestrial ichnology.
Joined

Lori is Published! Say hello to Hesperornithoides miessleri I recently saw a post that keyed me into the fact that there must not be a final post on this project. I am happy to (belatedly) say tha...