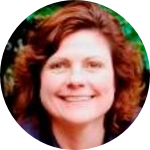 Dr. Murphy graduated from the New York State College of Veterinary Medicine at Cornell University in 1992. Upon graduation, Hayley started working part-time at several zoos in the Boston area while working as an equine and small animal veterinarian. She transitioned to zoos full-time in 1995 with a zoo medicine internship at Zoo New England in Boston, MA. Eventually Hayley became the Director of Veterinary Services at Zoo New England and stayed there for 13 years before coming to Zoo Atlanta, where she is presently the Vice President of Animal Divisions. Hayley is also one of the veterinary advisors for the Gorilla Species Survival Plan for the Association of Zoos and Aquariums and is the founder and director of the Great Ape Heart Project, an internationally recognized collaborative project dedicated to diagnosing, treating and preventing cardiac disease in great apes. In her spare time, she is the mother of two teenagers and married to a small animal veterinarian.

Circulating biomarkers of fibrosis in captive gorillas: a pilot study

Are endangered tigers in Nepal threatened by diseases from dogs and cats?

I am here at the International Gorilla Workshop in Guadalajara, Mexico surrounded by dedicated people who are just as passionate about Gorillas and their health care as I am. Heart disease is a maj...