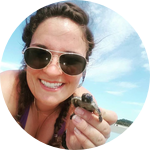 I began working with loggerhead sea turtles in 2015 as an undergraduate summer internship. Waking up at 04:30 and working in hot, sweaty, bug-infested conditions became something I looked forward to every day. Even though this work is physically and mentally strenuous, I am happier doing this than any other job I've had. While protecting and relocating nests, I realized that there is so much we don't know about this species and its populations. Current management practices advise the relocation of at-risk nests (eg. nests laid below high tide lines) to more viable locations--typically on dunes with high elevation. However there is some preliminary data that suggest that temperatures on these high dunes may get too high for successful incubation. In the state of Georgia, we spend a lot of time and money moving turtle nests around, so it's important to better understand what is impacting the success of these nests especially in the face of changing climates.

It amazes me that we can see such variation in nests and their resulting hatch success. This species has persisted for millions of years, and they're very adaptive when it comes to finding a place to put their nests. However humans are changing their nesting environments very quickly, and we need to understand how to facilitate the proliferation of this incredible species.

Start of the Season

Hello to everyone who has taken an interest in my project. I just wanted to send you a little update. I arrived on Ossabaw on May 3rd to start monitoring beaches for new loggerhead nests. Today we ...

It takes a village

Thanks to everyone's interest and pledges, we've achieved the campaign goal! I am so excited that we'll be able to continue this research. Because of your help I will be able to increase sample siz...

Hello all lovers of marine research! Thank you so much to everyone for their continued interest and support of this project. The campaign for funding is ending in 2 days, and I'm hoping we can stil...

Average day in the field

Beginning in May and continuing through the end of sea turtle season, my alarm rouses me from the bed at 04:45. After shuffling towards the kitchen and grabbing a large coffee and a granola bar, I ...

One year down, one year to go

I began this project in May 2017, on Ossabaw Island, Georgia. I'm interested in what environmental factors work to influence hatch success in loggerhead sea turtles (Caretta caretta). During the 20...