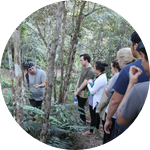 Undergraduate Degree in Environmental Studies at Washington College, Class of 2003

About
Since November 2008, I have served as the staff herpetologist for Tropic Ventures Education and Research Foundation, the non-profit organization that conducts scientific research at Las Casas de la Selva, a privately owned 1,000 acre sustainable forestry project and nature preserve in Patillas, Puerto Rico. The aim of the project is the demonstrate that second-growth forests have the potential to be managed for timber using techniques that do not deplete the resource base, thereby providing economic development in rural areas of the tropics while at the same time alleviating pressure to cut old-growth rainforest. My studies focused on general herpetological surveys, anole seasonal abundance, and leaf-litter surveys. I believe in the philosophy of “live in the Biome you study", which is one reason I moved to the tropics.

I approach issues in reptile and amphibian conservation from a multidisciplinary viewpoint. The point of any conservation program should be to help maintain not only target species, but as much of the biodiversity of an area as possible. I also believe that any conservation project needs to make itself “fit” into the local culture and economy as much as possible- you can save all the snakes, frogs, and lizards you want, but if the issue that endangered them in the first place is not addressed, be it habitat loss via unplanned development, poaching due to lack of economic opportunities, climate change, or just plain superstitious fear, then the program will be for naught. This has led me to develop an interest in Ethnoherpetology, how various cultures around the world view, and therefore relate to, reptiles and amphibians.
Joined