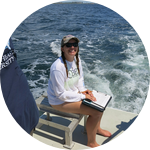 I have been in love with sharks for as long as I can remember and always longed to work towards understanding and conserving them. Since I was a little girl, I always strove to be near the ocean. Living and studying inland made me desire to study it even more. The ocean is the last large mystery to me, as most of what we know about it only scratches the surface. I immediately became intrigued with sharks once I realized how misrepresented they were to the public, and I began to study the science behind sharks and cancer. My mother passed away from cancer at a young age, so it seemed like a good place to start. Once I realized that there was no conclusive scientific evidence behind shark cartilage alleviating or curing cancer, I decided to dig deeper and to understand these creatures. I immediately fell in love with them, knowing that most people have no clue of the implications that sharks have on the overall health of the ocean, and by proxy, the planet. In my higher education career, I discovered my love for microbiology, and decided to combine the two in order to more fully understand how sharks function and thrive in the ocean, in order to improve the conservation of shark species around the globe.

Sharks host bacteria, but what are they?

Good morning all, I recently stumbled upon this article/case file that just came out, where a man successfully was treated for a shark bite by a White shark, with NO INFECTION. This is great new, a...

Just wanted to share some photos with you all from some trips that Dr. Burkholder and myself went on this weekend. We tagged 5 Nurse Sharks, a Blacktip, and a Lemon shark. It was a great weekend! ...

I just wanted to share some of my favorite photos to get you just as excited as I am about this project! ...

Sharks are Friends, NOT food.

Hello Friends of Sharks:I wanted to give you a bit of insight as to how I got interested in understanding sharks. When I was 8 years old, my mother passed away from Ovarian cancer. I was an angry c...

Inspiration
introduction
passion
cancer
110
0
0
Bram, Good to hear from you! I would love to hear about your research...do you have any papers I could read? I'd be particularly interested to see what the interactions are, and if there are any papers of a similar nature about the species I am working with. Thank you so much for the support!
Sharks host bacteria, but what are they?
View comment
I will definitely be sharing results as I sequence and analyze- I hope to have all of my data analyzed by Christmas or new years. I will keep you in the loop!
Sharks host bacteria, but what are they?
View comment