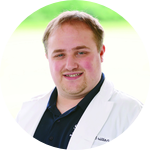 Scott Britton is the Research & Development Scientist for Duvel Moortgat, NV (Breendonk, Belgium). He has worked within brewing industry for 10+ years and has held various roles throughout his tenure, including QA/QC Manager and US Regulatory Compliance Manager. Previously, he also was an Adjunct Lecturer of Biology at Utica College (Utica, New York). He received a B.S. in Biology from Utica College (Utica, New York), and a M.S. in Biotechnology from The Johns Hopkins University (Baltimore, Maryland).

He is an active member of the American Society of Brewing Chemists, where he also serves on the ASBC Board of Directors. His primary research interest focuses on the microbial communities populating the phyllosphere of Humulus lupulus and its bioprospecting applications.