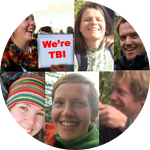 About
Taru Lehtinen: I´m a joint PhD student in Soil Science at University of Iceland and BOKU in Austria, focusing on soil organic matter and soil aggregate dynamics on organic and conventional farms. Within the TBI project, I´m trying to get as many schools and youth groups involved as possible, so that we can increase global soil awareness.
Judith Sarneel: In 2010 I finished my PhD on the formation of floating peat mats and now I work in Sweden where I evaluate the restoration of the Vindel river. I got involved with the TBI literally during tea time and now try to recruit as many people as possible to join and discover the world of soils.
Abi Ashton: I graduated in Biology from The University of Aberdeen in 2010. I currently work as a team leader for Edinburgh International Science Festival in Bangalore, India and Abu Dhabi as well as Edinburgh itself. I got involved with TBI when a friend mentioned it to me and the crowdsourcing aspect of the research really appealed.
Joost Keuskamp: I´m a PhD Candidate in Ecology & Biodiversity group at the University of Utrecht. I do ecological research on the consequences of nutrient enrichment to SOM and litter decomposition.
Bas Dingemans: In my PhD-thesis I study how increased nitrogen deposition and global warming will affect the carbon turnover in grassland soils. The main question i discuss: What is the effect of nitrogen addition and soil warming on the degradation rate of recalcitrant litter?
Mariet Hefting: My research focuses on the interactions between plants and soil in the context of cycles of carbon and nitrogen and the response of soil ecosystems to multiple global change drivers. I want to 1) understand the role of living and dead plants on nutrient and carbon cycling processes and 2) understand the effects of nitrogen enrichment and climate change on soil organic matter dynamics.
Joined

Tea's pledge activity based on country

Projects that Tea funded that have shared project outcomes