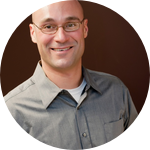 Dr. Richard "Richie" Davidson and the Center for Investigating Healthy Minds at the Waisman Center are well-known for innovative brain imaging studies on meditation, ranging from beginners to lifelong Tibetan Buddhist monks.

(second from left) began as Richie's grad student in 2007, working with brain scans of meditators responding to pain. His work with advanced meditators, monks, and yogis has taken him to India a number of times. He has studied and practiced in the Tibetan Buddhist tradition since 2002, most recently under the close guidance of Younge Khachab Rinpoche.

As planning for the current study progressed, Rick Solis (second from right) joined the team to help with coding of stimuli and task design. Andrew Schoen (far right) was then recruited to assist with general research tasks, as well as study organization and planning. Most recently, Sarah Buszka (far left) joined the team to help with data collection.