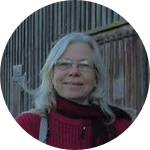 She Completed a degree in Fisheries at Grays Harbor College and Marine Biology at Western Washington University.