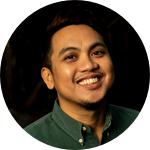 University of Hawai'i at Mānoa

Andrian Gajigan is a biochemist and oceanographer. His research interests span from the molecular level to ocean scale processes. This includes microbial oceanography, marine virology, genomics, and gene regulation. He has participated in several expeditions in the Atlantic and the Pacific Ocean. Previously, Gajigan contributed to a larger effort to develop an early predictive system for harmful algal blooms (HABs, aka red tide). In his work, he outlined a microRNA-mediated mechanism that allows corals to adapt to heat stress. He also described the diversity and community structure of microbes in different regions in the Philippine seas.

How does a microbial oceanographer prepare for fieldwork?

Ever wonder how it's like to prepare for marine sampling across the Pacific? We hope this video will give you a glimpse of the crazy logistics involved in bringing supplies and equipment from our l...

Thanks for all the support and donations! The donations will help uncover the wonders of the microbial world (see below). I arrived at the study site, Bolinao, Northwestern Philippines a week ago. ...