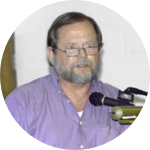 About
Dr. Allen West is a retired geophysical consultant for the oil-and-gas and mining industries. During his career, he worked for exploration companies in the Middle East and North and South America, searching for natural resources, including diamonds. After retirement, he helped organize a 26-member international research team of scientists who discovered evidence for a cosmic impact event 12,900 years ago that produced a discrete layer of nanodiamonds across most of the Northern Hemisphere, including Europe. During the last five years, Dr. West has published more than a dozen papers and abstracts on that impact event and the diamonds produced by the Younger Dryas Boundary (YDB) event. As a result of that research, Dr. West has developed two novel processes for creating nanodiamonds, which are the focus of an international patent application. Dr. West is one of the principal researchers and analysts for the YDB investigation and co-author of several YDB articles

Allen's pledge activity based on country

Projects that Allen funded that have shared project outcomes

Was the Middle Bronze Age Civilization North of the Dead Sea Destroyed by Fire from the Sky?
Other