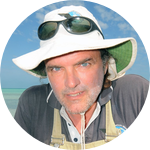 I first started visiting the Houtman Abrolhos as a child, beachcombing for shells and driftwood and dreaming of growing up to be a marine biologist. I was always fascinated with the marine environment and found myself watching the thousands of terns, noddies and shearwaters commute to and from their feeding areas over the horizon each day. Where were they going? What were they catching? As a student at Murdoch University, I used to sail my parents small yacht to the islands, and base my research from there. Now, after 25 years in the field as a marine ecologist, I hope to gain an insight into the Lesser Noddy foraging grounds by using GPS.

I have extensive experience as a marine consultant in Western Australia, having worked for government agencies as well as the fishing, tourism and the oil and gas industries. I pioneered field programs for seabirds in many remote locations along the Western Australian coastline, including the establishment of long-term studies at the Houtman Abrolhos (since 1991), Lowendal Islands (since 2004) and on Barrow Island (2008 - 2013).

I currently run a small environmental consulting business, but remain active in the seabird world. Our research at the Houtman Abrolhos celebrated its 25th season last summer, and we are proud to have self funded much of our research there. We have published our work on the impacts of climate variability (El Niño Southern Oscillation and the Leeuwin Current) upon seabirds and larval fishes at the Houtman Abrolhos Islands in several international peer-reviewed journals.

Hi There backers,Sorry for the long absence, but I have just returned after an extended field visit to the Houtman Abrolhos tracking those lovely Lesser Noddies with the new PathTra...

Thankyou to all my backers, we've got to our primary target plus some so I can now put the order inn for the new micro GPS units from Gary at PathTrack in the UK.We hope to start deploying GPS on L...

Earlier today, thanks to fantastic support from all our backers, we met our initial target.  I am delighted in every ones support and I hope that you will be equally excited with the tracking data ...

Micro GPS and my thumb!