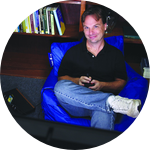 I am a professor of psychology at Stetson University. I have published over a hundred peer-reviewed articles and book chapters, the majority of which are related to media effects. I have published dozens of articles on video game effects in high impact journals in psychology, psychiatry, criminal justice, communication and pediatrics.

I was recently honored as a fellow of the American Psychological Association, and I currently serve on their Council of Representatives. In 2014 I was awarded an early career scientist award from the APA's Division 46 (Media Psychology and Technology.) I was part of VP Joe Biden's meetings on video games following the 2012 Sandy Hook Shooting and also participated at the 2013 CDC/IOM meetings on gun violence.

I obtained my Ph.D. in clinical psychology from the University of Central Florida. You can read some of my work at ChristopherJFerguson.com

Here's a paper written with Gene Beresin.  We discuss the intrusion of politics in media violence research and how this may have led professional advocacy groups like the American Academy of Pediat...

Here's some coverage from recent work from our lab.  This one looks at screen time and behavioral outcomes among youth.  Hope you enjoy it!