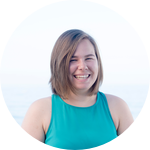 Dr. Pagniello recently completed her Ph.D. in Oceanography (with a Certificate in Engineering Leadership and a Micro-MBA) at Scripps Institution of Oceanography. For her doctoral research, she used passive acoustics and optical imaging to identify the sounds of commercially and recreationally important fish species and to locate their spawning areas within marine protected areas.

Camille completed her BSc Honours, Co-op in Marine Biology and Physics with minors in Mathematics and Ocean Sciences (First Class Honours) at Dalhousie University. During her studies, Camille was an NSERC USRA scholar at Dalhousie and Memorial University of Newfoundland, as well as Summer Student Fellow at Woods Hole Oceanographic Institution conducting research in the fields of computational geometry, atmospheric physics, biological oceanography, avian acoustics and biology, and ocean acoustics. She also completed a semester abroad as part of the SEA Semester Program (S-250) in which she sailed from San Diego, CA to Papeete, Tahiti and conducted marine chemistry research.

Camille has been an active member of the Marine Technology Society (MTS) since 2010, The Oceanography Society (TOS) since 2015, and the Acoustical Society of America (ASA) since 2017 serving in multiple leadership positions. She also competed on MUN’s Eastern Edge Robotics team at the 2013 MATE International Remotely Operated Vehicle (ROV) Competition in Federal Way, Washington where she also served as Ocean Career Expo Coordinator. She is AAUS Scientific Diver, and regularly dives for scientific research purposes.

Attention all kelp forests and acoustic lovers!We need your help! We need your $1 vote to help push the Kelp Sound project forward in the Kelp Challenge Grant competition, and raise more funds towa...

More Creatures of the Kelp

Dear Backers,Thank you so much for supporting the Kelp Sound project! As a thank you, we wanted to share exclusively with you more stunning images of animals in the kelp forest. We hope you enjoy t...

Why should you care that kelp forests are collapsing worldwide?

Creatures of the Kelp

Welcome Pureum Kim, Lyndi Antic, DelWayne Bohnenstiehl and an Anonymous Backer to #TeamKelp! Thanks so much for supporting the Kelp Sound project!Today's lab note will explore the question of who l...

Do you like ice cream? If yes, you should also care about kelp conservation!

Welcome Rita Alanis, Grace Young and Salome Bu to #TeamKelp! Thanks so much for supporting the Kelp Sound project!So you might be wondering... what is kelp?Kelps are large brown algae that grow in ...

Thanks to our new backers and more details on upcoming lab notes!

Waking up today to find a big pledge from our new backer Susan Miller Jones put a big smile on our faces! Thanks so much for your support! Also, thanks to my mom Sky for supporting the project!We a...

Thanks to our first backers and what to expect over the next 30 days!

Special thanks to Ed Parnell, David Lang and Kent Barnes for supporting our project on Day 1! We've got a long way to go to reach our very ambitious goal, but we are super excited that we aren't th...