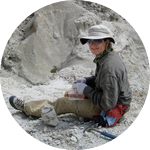 Estella B. Leopold Professor in Biology and Curator of Paleobotany

I'm Camilla's academic advisor. I've been fascinated by the evolution of life on Earth since I was a little girl in Sweden. I vividly remember finding my first fossil (a trilobite) on the shores of Gotland (a Swedish island featuring some amazing Silurian reefs), which led me to, for the first time ponder the depths of geologic time. Initially I wanted to study how vertebrate communities on land had changed over millions of years in response to environmental change. However, I soon realized that plants are the key to understanding much about terrestrial ecosystem change and vertebrate evolution, and switched my studies to paleobotany (study of fossil plants).

I've focused much of my work on understanding the evolution of grasses and the spread of grasslands during the last ~80 million years (Late Cretaceous and Cenozoic). For this work, I have mainly used plant silica (phytoliths) as a source of information about past vegetation. Because phytoliths is a relatively new tool in paleobotany, a lot of work is needed to develop it. That is what Camilla is doing with her dissertation and with this project! Her work is incredibly important for documenting the spatial resolution of the phytolith record. Ultimately, the outcome of this study will allow researchers to more precisely reconstruct vegetation variability, which is vital for understanding, for example, controls on biodiversity through Earth history.

Can we use phytoliths in modern savanna soil to understand past ecosystems?

I second Camilla: This is so fantastic! Thank you all for supporting this project and by doing so, pushing science forward. Can't wait to see what we'll find! --Caroline
Can we use phytoliths in modern savanna soil to understand past ecosystems?
View comment