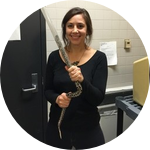 I am an evolutionary biologist interested mainly in the process of adaptive evolution in the context of coevolutionary systems. I use diverse methods to study these phenomena, including evolutionary biochemistry, biophysics, and phylogenetics. I am particularly interested in how adaptive coevolution can be understood at the molecular, functional, and phenotypic level. I am currently a PhD candidate in the University of Minnesota’s graduate program in Ecology, Evolution, and Behavior co-advised by Dr. Sharon Jansa and Dr. Antony Dean.

I have studied evolutionary dynamics of several systems including marsh grasses, Diamondback Terrapins, and the Vegas Valley Leopard Toad. My current work focuses on coevolutionary interactions between mammals and venomous snakes.

Hello backers! Thank you so much for your superb support and contribution! Unfortunately we did not meet our goal in time, and thus the project will not be funded through experiment.com. However, w...

Cutting out Aspercetin to sequence

Two other venom proteins we work with are Botrocetin from Bothrops jararaca (Jararaca snake), and Bitiscetin from and African viper Bitis arietans (the Death Adder). Learn more about how they work and see what a crystal structure looks like in the l...

Two other venom proteins we work with are Botrocetin from Bothrops jararaca (Jararaca snake), and Bitiscetin from and African viper Bitis arietans (the Death Adder). Learn more about how they work...

How we look at the purity of protein preps:

Against a beautiful backdrop of Minnesota snow

42
0
0
Claudia, SO excited to hear about your interest! That's terrible about the copperhead bites! Where were they located?
Uncovering the sequence and crystal structure of snake venom proteins
View comment