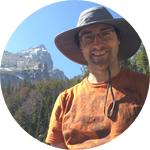 I am on a Biology Master thesis program at University of Massachusetts Lowell. My thesis will be on elemental analysis of Amblypygid (whip spider) cuticle.

I could say that I am a zoologist by profession and heart. As a kid, I was one of those who would play in the garden or park, always looking for some unusual animal. Through such activities I got to know and love arachnids. They became my passion, as I got Bachelor's degree at the University of Belgrade, Serbia, and a profession, as I worked for four years at the Natural History Museum in Belgrade. But I wanted to do more, I wanted to conduct scientific research on arachnids.

And here I am, at UMASS Lowell, conducting research on whip spiders, very small and fascinating group. They showed up long before dinosaurs (in Middle Devonian period), and they are still present. Like most other arachnids, whip spiders are predatory animals. But what is intriguing about them, is that they are very good and fast climbers, even though they have very strong cuticle and largest bodies in the arachnid world.

My current research will be focused on three species: Catageus moultroni, Damon cf. diadema and Phrynus marginemaculatus, with the possibility of adding one more. Elemental analysis of their cuticle could offer new insights into their ecology and evolutionary success as a group. It could also foment new discoveries in the field of biomaterials and biotechnology.

Are whip spiders aficionados of metal?

The harvestmen (Opiliones) fauna of the Crasto Ecological Reserve (Sergipe-Brazil)

Dear Ticks, Show Me Your Metal!

Thank you! :)
Are whip spiders aficionados of metal?
View comment