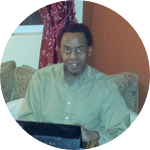 I did my first science projects at the age of 10, among them, photo processing and electricity experiments. I did surgery on mice at age 13 as a high school freshman. Those experiences, along with being valedictorian helped me to enter Harvard College. As an adult, I have been a chemist at General Foods and director of a government funded program in Washington DC called the Technology Commercialization Center where we assisted an electric car company. I have been a computer programmer, and I am founder of a company that has 2 patents and 2 patents pending for rapid battery charging technology.

I became sole distributor for a functional age test used by medical practices and other care providers. It measures 12 biomarkers of aging and provides an estimated functional age compared to chronological age. I have experienced unusually slow aging. I hope to eventually learn why through the sequencing of my DNA by the Personal Genome Project started by scientists at Harvard Medical School.

Elliott's pledge activity based on country

Projects that Elliott funded that have shared project outcomes