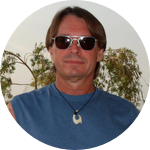 I am a microbial biogeochemist with a wide range of interests in microbes and what they do in natural systems. My research has included numerous terrestrial, freshwater and marine systems, along with various extreme environments. Research focused on what microbes do has been complemented by studies of microbial composition and diversity. My work has also focused on animal and plant systems, and I have even discovered and described two marine invertebrates.

In addition, I have characterized the gut microbiomes of two invertebrates (Saccoglossus bromophenolosus, and the oyster, Crassostrea virginica), and am engaged in a comparative analysis of the gut microbiomes in a variety of felids (cheetahs, tigers, cougars, bobcats, jaguars, and servals). The latter effort involves an undergraduate-focused research and teaching experience.

I am on the faculty of Louisiana State University where I serve as a grad and undergrad lecturer and research advisor. I have published extensively (> 150 pubs, H = 56, Google Scholar) and am a fellow of the American Academy of Microbiology.

Hi Cindy.... thank you : ) You are certainly correct, and we hope to be part of that. Cheers, gk
Life inside tigers: exploring the tiger gut microbiome
View comment