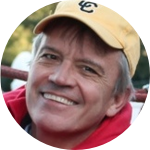 I'm an evolutionary biologist with a long standing interest in the evolution of vertebrate animals. Chondrichthyan fishes (sharks, skates, rays and chimaeras) are the modern day remnants of one of the oldest splits in vertebrate history. They branched off from the rest of jawed vertebrates about 425 million years ago and have persisted to the present day. Given their remarkable evolutionary persistence, it is quite surprising that these animals remain so poorly explored. They are much more diverse than is generally recognized. They are not “invariant relicts” of our ancient past, but rather are highly specialized well-adapted, modern organisms that exhibit anatomical and physiological adaptations to several different environments. We are interested in reconstructing the sequence of events that lead to the current diversity of chondrichthyan fishes. We’d like to understand how and when they acquired the novel traits they exhibit, the likely environmental forces that shaped their adaptations, and the biogeographic influences that have lead to their current distributions. All of this hinges on our having an accurate estimate of their phylogenetic relationships. In our research group we work with DNA sequence data and invest a lot of effort in trying to make sure our inferred phylogenies are correct. We sequence DNA from both the nuclear and mitochondrial genomes. We have developed new cross-species gene capture methods that allow us to collect data from several hundred orthologous protein-coding genes across divergent taxa. Over the course of 30 years, with extensive help from a number of international colleagues, we have been able to amass DNA samples from approximately 800 of the 1200 described living species of Chondrichthyan fishes. We hope to provide an accurate, temporally calibrated, highly resolved history of the evolutionary diversification of all sharks, skates, rays and chimaeras.

Gavin's pledge activity based on country

Projects that Gavin funded that have shared project outcomes