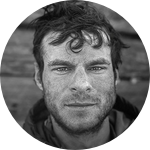 Gregg founded Adventure Scientists in 2011 with a strong passion for both scientific discovery and exploration.

National Geographic named Gregg an Adventurer of the Year in 2008 when he and a friend completed a 7,800-mile trek along the spine of the Andes Mountain Range. He was included on the Christian Science Monitor’s 30 under 30 list in 2012, and the following year became a National Geographic Emerging Explorer for his work with Adventure Scientists. In 2013, he was named a Backpacker Magazine “hero” in 2015, a Draper Richards Kaplan Entrepreneur and one of Men’s Journal’s “50 Most Adventurous Men.” In 2017, he was named an Ashoka Fellow and in 2018 one of the Grist 50 “Fixers.” Gregg was named a Young Global Leader by the World Economic Forum in 2020 and is a member of their Global Futures Council on Sustainable Tourism.