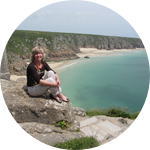 Helen's job is to make sure the various dynamics of the Cape Leopard Trust projects are managed transparently and efficiently. Her work includes relationship management with partners, fundraising, sponsorship liaison, financial oversight and communication, as well as building brand awareness. No stranger to the bush and wide open spaces, Helen completed her Matric in the northern Cape, and then left for Europe where she trained in multiple aviation disciplines with Lufthansa and travelled the world. After sixteen years away from Africa she returned to Cape Town in 2001 and established a consultancy company specialising in developing sustainable and ethical business practice in tourism. Much of the focus was using tourism as a catalyst to aid conservation and social development, facilitating some of the South Africa's flagship responsible tourism projects.

Helen has always been involved in one way or another with conservation and amongst others has worked with Dyer Island Cruises and the Dyer Island Conservation Trust, as well as Dr Will Fowlds and the Chipembere Rhino Foundation She joined The Cape Leopard Trust in January 2013 as Project Coordinator, assisting Dr Quinton Martins, Trust co-founder and then CEO. Helen was subsequently appointed CEO in 2015 when Quinton left the Trust to take up a new position in California as Assistant Director at the Snow Leopard Conservancy. As CEO of Cape Leopard Trust, she ensures that the findings of the Urban Caracal Project's research promote conservation and education to the public.