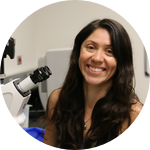 My interest in sea turtles started since I was in college where I joined a group of volunteers working in a remote beach in Mexico, country where I was born and raised. Since then, sea turtles have been the primary focus of my research. During my PhD I studied environmental sex determination, trying to unravel the molecular mechanisms through which environmental factors, such as temperature direct the differentiation of the gonads. Later as a postdoctoral fellow at Florida Atlantic University, I studied the effect of moisture conditions during incubation on turtle embryonic development focusing on two main aspects: embryo growth and sex ratio, project in which we develop a non-invasive method to identify sex in hatchlings via blood samples. I have participated in multiple, collaborative research projects that combined expertise from different labs in Mexico, France and the US resulting in 24 peer-reviewed publications. The ultimate goal of this current project is making this technique accessible to any sea turtle group because we recognize the importance on estimating sea turtle sex ratios worldwide.

Itzel's pledge activity based on country

Projects that Itzel funded that have shared project outcomes